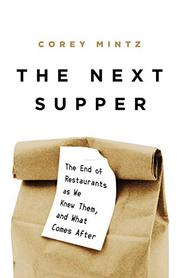 The End of Restaurants As We Knew Them, and What Comes After

A flinty-eyed look at the world of food and how the pandemic has exposed some of its uglier aspects.

“My quest is nothing less than figuring out how to eat restaurant food and not be an asshole,” writes Mintz, who became a restaurant reviewer after working as a chef, a career trajectory that’s rarer than one might think. That the restaurant world died, by his lights, in 2020 doesn’t mean it won’t come back. However, it must shed some bad associations. For one, the author zeroes in on the genius chef who delivers abusive tirades on line cooks and servers, his nose stuffed with cocaine, his belly full of booze. Such people exist, Mintz allows, but their time has passed, and many have fallen (think Mario Batali). Why the drugs? Why does every cook, it seems, smoke? Because those chefs set insane paces, and “smoking is often the only excuse, during a long day, for leaving the kitchen or getting off your feet.” Those long hours are usually rewarded with substandard pay, and of course the whole restaurant world operates on tips, which Mintz neatly links to Reconstruction-era evasions of paying emancipated slaves a fair wage—an evasion now applied to a demographic heavy on women and immigrants. Regarding the latter, Mintz counsels that a little family-run kitchen on the outskirts of town is your best bet since the inner core is too expensive except for the giants. He advises that we order food to be delivered directly from the restaurant and not by third-party delivery services, which he considers predatory; that tips be paid in cash; that diners not chase the newest restaurant on the block (“Restaurants are built to age gradually into their best selves. The moment at which we shower them with attention is precisely when they’re not ready for it”); and that we value food and its providers more than we now do, once we emerge from the bunker.