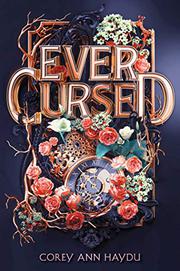 Five years ago, a powerful witch named Reagan cast a Spell of Without on the Queen of Ever and her five daughters, each of whom succumbs on her 13th birthday.

Jane, the eldest at 17, can’t eat; Nora can’t love; Alice can’t sleep; Grace can’t remember; Eden will soon have no hope; and the queen lies in stasis in a glass box. After Reagan returns from her banishment, she comes to terms with the consequences of her actions, borne of rage, which could destroy the complex balance between witches and royals. She has four days to Undo the spell before her 18th birthday, when it becomes permanent (and for Jane and Alice, deadly). Jane crosses the castle’s moat for the first time (royals must maintain a Royal Distance from their subjects) to gather the objects needed to break the spell, and after learning Reagan’s reasons, Jane must reconsider everything she thought she knew about witches, the people of Ever, and her beloved father. Quirky details enliven Haydu’s magic-infused world, and themes like sexual assault and rampant misogyny are deftly explored while allowing for hope and healing. There are a few surprises, but Haydu doesn’t rely on gimmicky twists: This one is all about compassion, female solidarity, fighting for change, and smashing the patriarchy. Jane’s family and Reagan are white, Alice is trans, Grace is lesbian, and royals, witches, and ordinary citizens are diverse in skin tone.