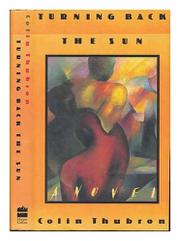 TURNING BACK THE SUN

Outcasts from paradise haunted by death, disease, and drought have a moment of reprieve in this finely crafted—if ultimately hollow—fable by 1991 Booker Prize nominee Thubron (Falling, 1991, etc.). Set in a mythical authoritarian subtropical country between the two World Wars, this is ostensibly the story of a ``purpose town''—a place where ``nobody arrived for pleasure.'' Like protagonist Rayner, who's been sent from the capital to be one of town's two doctors, the citizens come to work, to pioneer, but not to leave—that's forbidden, unless special permission is given. The town itself, where ``nothing is older than a century,'' is surrounded by parched lands where bands of mysterious natives still practice their traditional customs. The despair of this ``conflation of exiles'' is further exacerbated when murdered bodies appear in the town and on the outskirts; a strange disfiguring rash spreads; and a long-endured drought makes the natives bellicose. Rayner yearns for the capital—``the shimmering city on the coast''—and dreams of old friends and loves he knew there. A love affair with dancer Zoe is not enough to cure his obsession; but on a visit to the capital, Rayner finds that paradise is not quite as he remembered. He returns to the town, feeling ``an intangible burden to be lifting''; and on patrol with the army, he witnesses a poignant ceremony in which the natives, hoping to climb back to heaven on their special tree that had stopped growing, try to prevent the sun setting so that everything ``will be all right again.'' The army does not fire on the natives, as they had intended; the rains come; and Rayner realizes that there is still Zoe. Hell is all there is, perhaps, but there are compensations. Atmosphere, mood, and place are all marvelously evoked, but the underlying theme is too spelled out, and not particularly new. Clever, beautiful, but disappointing.