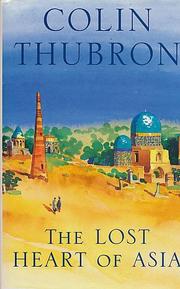 THE LOST HEART OF ASIA

Shimmering dispatches from the far, far reaches of the geographical imagination, from the captivating, highly polished hand of Thubron (Turning Back the Sun, 1992, etc.). To say that central Asia is a place rich in history and legend is to put it mildly: land of the rivers Oxus and Jaxartes, of Samarkand and Tashkent, of Alexander, Tamerlane, and the great Khans...Kafiristan! Thubron drops in to measure its doings since the Great Fall of '91. He discovers a moody and unsettled place. From the endless cotton fields of the central plateau to the shepherds of the high Pamirs, all is in flux. Some towns are raucous with a sense of freedom and possibility; others just can't get their wheels turning, stuck with the political hacks of yesteryear, and the feeling is very much down in the dumps. At every turn Thubron bumps into one religious movement or another: Baptists in Kirgizhia, German Mennonites in Uzbekistan, a synagogue here, a cathedral there, and—not surprisingly—so many mosques you couldn't throw a brick without hitting one. The weaving of Islam into the political life of the republics, though still nascent, is a foregone conclusion, and the people of the region voice the same fears expressed everywhere whenever church invades state: the possibilities of sexual discrimination, religious persecution, interference in education (not that the nation-state has necessarily done so well in these venues, locals add). Thubron laces the narrative with gobs of history. Each place he visits comes drenched in a mythic past, and not just the ancient variety typified by Mongol hordes and the silk road, but also some of the more recent vintages: gulags pepper the land, and it was in Kazakhstan that the Soviets tested their atomic weapons and built the vilest of their heavy industry. Life has always been eventful in Central Asia; no doubt it will remain so. And if Thubron can't predict the future, he does provide all manner of telling detail to bring the region out of fable and onto terra firma. (First serial to CondÇ Nast Traveler)