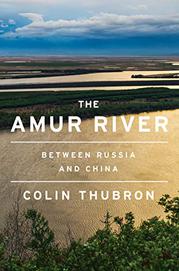 Between Russia and China

The celebrated British travel writer takes us on a fascinating journey along the Amur River.

In his latest adventure, octogenarian Thubron planned to follow the river “as it flows through south-east Siberia then meets China, then breaks for the Pacific.” For more than 1,000 of its 2,600 miles (which includes its source river, the Argun), the Amur forms the border between the Russian Far East and northeastern China. The Chinese call it Heilongjiang, which means “Black Dragon River, for the dragon’s imperial grandeur.” One of his first guides, a Mongolian horseman, warned him about the dangerous, “almost impassable” landscape. Shortly after starting out, the author suffered an injury, which forced him to question his body’s ability to keep up—yet, as always, he persevered. Standing out as a foreigner in a region that rarely hosts travelers, Thubron became the object of covert attention. Often, this curiosity resulted only in extended gazes and innocent questions, but he also endured numerous police interrogations and a nagging fear that he was being followed. Accompanied by various guides, the author made his way through this vast, unforgiving territory by car, boat, and train, evoking with beautiful detail and compassion its rich history and culture. Though the region is shrouded with mistrust, Thubron effectively brings it to life. Throughout his trip, the author engaged in discussions with local residents, who openly shared their personal feelings and histories as if they were longtime friends. Many villagers lamented the loss of their native cultures and offered conflicting views about the ownership of the region. The Chinese spoke of Russian land grabs and the profound unease of Chinese artifacts lying inside Russian borders, while Mongolians and Russians claimed that the Chinese were stripping the land and infiltrating every aspect of business. Thubron also laments the demise of the region’s Indigenous cultures and languages. Readers will, too, as they savor this enthralling travel narrative.

A captivating portrait of a remote region of the world that many readers may know nothing about.