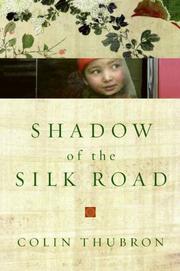 SHADOW OF THE SILK ROAD

At the very least, his marathon expedition through desert, mountains and war-scarred landscapes testifies to the author’s fortitude and resourcefulness. He’s quarantined by Chinese authorities during the SARS epidemic, nearly killed by a drunk driver in a head-on collision and forced to endure treatment of an abscessed tooth by a team of Iranian village dentists who don’t use anesthetic. Thubron attends a rock concert staged in a Tehran military hospital, dodges suspicious guards at several remote border crossings and searches out the tombs of Genghis Khan, Omar Khayyam and Ayatollah Khomeini. He augments his trenchant narrative with impressive historical background and evocative lyrical prose: “In late autumn the road traversed a near-desert plain. From time to time a faint, brown wash overhung the horizon, as if a watercolorist had started painting mountains there, then forgotten them.” Even the most erudite readers, however, may find themselves daunted and disoriented by this lengthy sojourn in such consonant-laden regions as Uzbekistan, Kyrgyzstan and Tajikistan, complete with their obscure attendant cultural histories. Until 1498, when the Portuguese sailed around Africa and found a safer route to China’s riches, the Silk Road across central Asia was traveled by successions of invaders. East-bound from Rome, Greece and Arabia came poetry, metals and conquering armies. From China, traders carried westward such wonders as silk, paper, gunpowder and the mechanical clock. Thubron carefully picks through the cultural and archeological remains of a half-dozen societies with a discerning eye and a scholar’s discipline, pausing to note the fallout from such relatively recent arrivals as China’s murderous Red Guards, the Taliban and ruthless Afghan warlords. He also pauses long enough to meet and introduce a host of memorable characters, including a Chinese college dean and some Afghan truck drivers.

An impressive, rewarding and occasionally exhausting trek, most suitable for the hardcore travel reader.