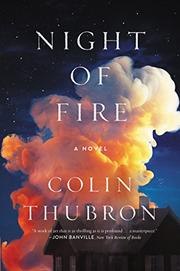 Flashbacks provide a glimpse of the lives of seven seemingly disconnected people who occupy an old British building in this engrossing novel by the celebrated travel writer.

Faulty wiring sparks a fire one night in the basement of the building, and as it moves from flat to flat, Thubron (To a Mountain in Tibet, 2011, etc.) visits each tenant in six long chapters, all bracketed by two short ones on the landlord. “Priest” features a cleric named Stephen as a photograph sends his memory back 50 years through a variety of religious experiences, from the seminary to the asceticism of a Mount Athos monastery and missionary work in Tanzania. Memory is both physical and personal in the “Neurosurgeon” section, which alternates between the doctor on a hike deciding whether to propose to his companion and contemplating operations where patients may lose more than excised tissue. In the “Naturalist” section, the title character is Stephanie, the frequent subject is butterflies—sometimes thought to be “spirits of the departed”—and the book’s high point of sensuality is her making love with a woman named Samantha. The “Photographer” is Steve, who tries to reach his dead mother through a séance. The “Schoolboy” lies to gain sympathy by saying his parents are dead. And then comes the “Traveller,” named Steven, who has been roaming for 50 years. He has recently had brain surgery. He visits a Tibetan monastery in Varanasi, where the dead are burned in public. The book by this point is bursting not just with variations of Stephen, but with nearby death, which all the building’s dwellers may be facing on the night of fire they unavoidably share, as the traveler unites them in mirroring many details of their stories—a pilgrim not unlike the author, who is 77 and can look back at 50 years of travel and fiction writing.

Thubron isn’t subtle in his themes or structure, but he intrigues with his many resonances and takes the reader on a journey through life’s essential questions.