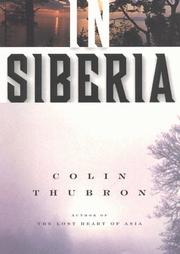 Thubron (The Lost Heart of Asia, 1994, etc.) proves again why he is considered one of the most affecting travel writers today with this graphic, melancholy portrait of Siberia. Though Thubron has spent years among Russian and Central Asian backwaters, Siberia had eluded him as more a rumor than a place, its beauty stark, its notoriety more fearsome still. But when this vast, forbidden area—fully one-third of the northern hemisphere— suddenly opened to outsiders, he hurried here. Traveling by the seat of his pants, he took in all four corners, from the tundra’s silvery maze of lichen and fungi and relict labor camps to ratty, vicious cities and towns to the cold unscented air of the high Altai: —At sunset, cresting a pass, we looked down on a wilderness of mountains, where only cloud shadows moved and a pale half-moon was stenciled on the sky . . . then the track and the world stopped.— From each locale he pries a nugget—not some reputed essence, but a lasting personal tale or memory he passes to the reader like a gift: a darkly heroic incident at an Arctic coal mine for political prisoners, the last mellow days of September the locals call Lady’s Summer. Thubron’s prose poetry is abrupt, frugal, and glinting——An old man sits in his dacha in the Golden Valley,— begins one episode—and he is a wary reporter: —The only signs of truth would be chance ones: damp wallpaper of indiscreet secretaries or the way the man’s hands wrenched together.— And if Siberia is slippery——I was reduced to knowing it by glancing detail, snatches of talk——what he has caught is treasure enough. As a landscape, Thubron’s Siberia is indifferently magnificent; as a place, it is furtive, luckless, crime-ridden, a world where the past is fast rotting and new foundations have yet to be poured. (Map, not seen)