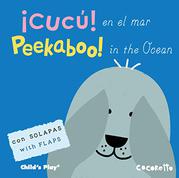 Starting with the title, the Spanish text always comes first, with the English translation below in a different color. The peekaboo theme is emphasized, with each left-hand page asking the same question: “¡Cucú! ¿Quién está ahi? / Peek a boo! Who’s there?” On the opposite page, an animal uses their flippers, tentacles, fins, or claws to cover their face. Shaped, full-page gatefolds always open to the right to create an extended spread with the original question, the answer in both Spanish and English, and a stylized image of the animal. The words stand out against color-saturated backgrounds. Each animal is shown and described in action: “dolphin splashing,” “octopus creeping,” “turtle swimming,” “seal diving,” and “crab digging.” Very quickly, even the youngest children will start repeating the question in both languages and manipulate the large, sturdy flaps. The action words are a stretch, but one difficult word and its translation is just right for toddlers. There is no pronunciation guide for readers not conversant with Spanish, but the clear design and repetition make up for this minor gap. Hopefully the other titles in the series—Peekaboo! On the Farm, In the Jungle, and In the Snow (all 2016)—will also be rereleased in bilingual editions.