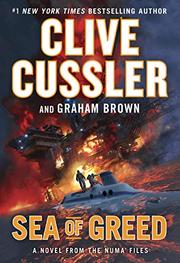 In 1968, the French submarine Minerve sinks without a trace in the Mediterranean. In the present day, an oil rig explodes in the Gulf of Mexico, killing and badly injuring many workers. Enter Kurt Austin, head of Special Projects at the National Underwater Marine Agency. Kurt leads a team that assists in marine emergencies, so they respond to the Mayday call and quickly find a stream of underwater flame—escaping gas is burning in the water, down “as far as the eye could see.” It’s a fire that needs no oxygen, a phenomenon Kurt’s team has never seen. NUMA calls the disaster clear-cut sabotage, and Kurt’s assignment is to find the guilty party. Said party is Tessa Franco, CEO of Novum Industria, who is busily sabotaging oil production around the world. She wants to promote her new fuel cell to replace “this mad reliance on fossil fuels” and become even more stinking rich than she already is. She has “infected half the world’s major oil fields” by pumping oil-eating bacteria into them, rendering them useless. “She is the oil crisis,” Kurt tells the president. Kurt's and Tessa’s teams race to locate the Minerve, which may have critical genetic research Israel commissioned half a century ago. There are great action scenes underwater and on the surface, where Tessa’s seaplane, the Monarch, is almost as big as a 747. Rotten to the core, Tessa wants her lackeys to “get rid of Austin once and for all.” Her odds look mighty good considering the firepower she brings to bear.

Fast-paced, imaginative fun. May Kurt and crew survive, as there’s a good series to continue.