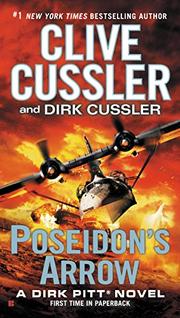 The United States is on the brink of approving the fastest, most powerful attack submarine ever when its designer is killed and his plans are stolen. In his efforts to recover a crucial piece of the prototype, superseaman Dirk Pitt faces a series of violent encounters on land and water.

In his 22nd adventure (Crescent Dawn, 2010, etc.), Pitt, director of the National Underwater and Marine Agency, is matched with Austrian baddie Edward Bolcke. A grudge-bearing villain out of James Bond who made his fortune in mining in Colombia and Panama, he has been adroitly manipulating the Chinese by selling them their own rare earth elements. The magnetic properties of the minerals are vital to the development of weapons systems and other computer-based properties—which may explain why ships transporting the materials have been disappearing and bodies have been found burnt to a crisp by irradiation. Teaming with the attractive and dangerously impulsive NCIS agent Ann Bennett—as well as his oceanographer daughter Summer and marine engineer son Dirk Jr.—Pitt applies all his skills as an ex-Air Force man to outsmarting and, in some cases, outrunning Bolcke's henchmen. The action scenes can be predictable, the dialogue wooden. But to their credit, the Cusslers (collaborating for the fifth time) overcome the factory aspect of these novels with bursts of energy and efficient storytelling. They also sustain a level of intelligence not always found in mass-market adventure fiction.

Ranging from Panama and Mexico to Idaho and Washington, D.C., this book is constantly on the move—one reason it avoids dull spots so well.