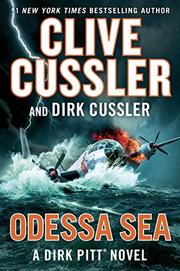 Cussler’s conglomerate (Built to Thrill, 2016, etc.) gives fans their money’s worth with 500 pages chronicling Dirk Pitt’s Black Sea adventures while hopscotching back to the Russian Revolution, then up to today’s Iranian quest for nuclear weapons, and throwing in a rogue terror attack on the United States for good measure.

Dirk and his longtime lieutenant, the rugged Al Giordino, are sailing the Black Sea because his National Underwater and Marine Agency has been contracted by Bulgaria to seek an Ottoman-era shipwreck. They answer a distress call from a ship they find full of dead bodies and highly enriched uranium, which turns out to have been purloined from unstable Ukraine by cohorts of Valentin Mankedo, a Bulgarian black-market smuggler, and destined for Iran. Meanwhile, Dirk junior and twin sister Summer work the Baltic Sea, where they stumble on shadowy hints of a trove of 1917 Romanov gold bullion. The second nefarious Mankedo enterprise troubling Pitt’s crew is the salvage of an atomic weapon from a Soviet 1955 bomber crash. Mankedo’s been financed by Martin Hendriks, tech billionaire and cutting-edge Peregrine drone manufacturer, whose devious plans include an elaborate false-flag operation. The A-bomb is usable because it’s been submerged in "anoxic waters…loaded with hydrogen sulfide," so oxygen-deprived that it prevents corrosion. There are the usual esoteric Cussler-style science and historical factoids to spice up the story, but to spark the hunt for the czar’s gold, he imagines a Proposed Treaty of Petrograd which send the younger Pitts seeking the bullion in secret tunnels burrowing through the Rock of Gibraltar. In one storyline or the other, there are cinematic boat chases, nighttime commando raids, dueling research submersibles, a secret trip to Bermuda, and a Chesapeake Bay battle involving the Civil War sloop USS Constellation.

Sketch out some exotic, ephemeral settings, make every villain as nasty as possible, and it’s another of Cussler’s cinematic-style entertainments spinning out at hold-on-to-your-hat speed.