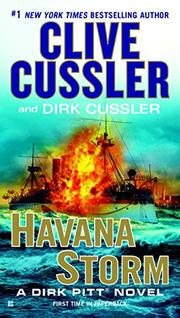 In a quest connecting Aztecs, the Spanish-American War and boatloads of modern villains, Cussler pater et filius (Poseidon’s Arrow, 2012, etc.) chronicle another adventure of the venerable Dirk Pitt, chief of the National Underwater and Marine Agency.

Cussler addicts crave action, and the authors deal it out liberally. In the first 200 pages, there’s a flashback to the 1898 sinking of the Maine in Havana Harbor; innocent Jamaican fishermen are vaporized; one of Castro’s ministers is assassinated; three oil workers are trapped in a deep-water diving bell; an oil exploration ship is sunk; and Dirk and Summer, children of Dirk the elder, confront danger with derring-do in Mexico as they seek clues to an ancient Aztec codex. Cussler’s regulars are on hand, including Al Giordino, Dirk’s number two, with “the burly build of a professional wrestler combined with the toughness of an elder crocodile.” Chief villains are two, both greedy Cuban commies. Gen. Alberto Gutier has political ambitions, and he’s charged ruthless Juan Díaz with financing those ambitions via rogue deep-sea mining. Díaz dupes the CEO of a Canadian mining company, an enlightened, environmentally conscious fellow who’s a bad judge of business partners, into providing the high-tech equipment. However, Díaz’s explorations vent mercury into pristine tropical waters, and that attracts NUMA’s attention. Descriptive flourishes, such as “he raised him off the floor and ground his teeth in the man’s face,” sometimes clank, and there’s a plot hole or two as ships sail around the Caribbean setting off explosions that register as seismic events. The other half of the Aztec codex—road map to riches—is found after a bit of crafty research, requiring more undersea work, descriptions of which are Cussler’s forte. Few read Cussler for literary nuance and protagonists steeped in irony, but Pitt and company are the stuff of heroic dreams: beautiful and high-minded and generous rich folks with cutting-edge technology and ample time to save the world.

Another super Cussler fun read fit for a lazy weekend.