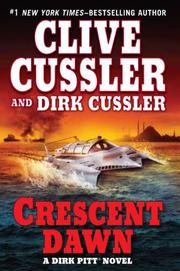 Mix terrorists, Roman artifacts, delusions of dynasty and irrefutable physical evidence that Jesus of Nazareth lived, then add water—from the Mediterranean Sea—and you get another aquatic adventure starring Dirk Pitt and his colleagues at NUMA.

This is Cussler's 21st effort with Pitt and the National Underwater and Marine Agency (Arctic Drift, 2008, etc.). While studying algae blooms in the Aegean Sea, the intrepid explorer stumbles upon an Ottoman Empire era shipwreck, among which there are Roman artifacts. Pitt takes his find to his friend Dr. Rey Ruppé at the Istanbul Archeology Museum hoping to discover why a medieval ship would have been carrying Roman-Christian era cargo, and the nonstop action begins. There is a cast of familiar characters, including Al Giordino, Pitt's twin children, Summer and Dirk Jr., all complemented by a crew of memorable villains, including Ozden Celik and his sister, Maria, the last direct descendants of the Ottoman dynasty. That pair is in possession of black-market HMX explosives and are intent on starting a revolution. Readers also meet assorted allied Arab terrorists, traders in purloined antiquities and a too-easily-forgiven rogue archeologist named Ridley Bannister. The 100 chapters sail by rapidly when Cussler brings in the legendary Lord Kitchener, drowned in 1916 when the British warship HMS Hampshire sinks while on a mission to Russia, Helena, the mother Emperor Constantine, a nearly perfectly preserved Roman galley in a cave on Cyprus, and a letter from Jesus to Peter. The complicated plot has the most nefarious villains dead by chapter 84. Dirk Pitt fans will be happy to note the appearance of the obligatory auto, this time a 1948 Model 135 Delahaye convertible coupe with a Henri Chapron coachwork-body.