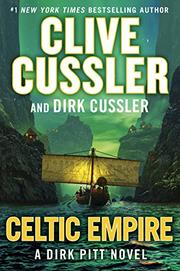 The latest Clive and Dirk Cussler thriller (Shadow Tyrants, 2018, etc.) has Dirk Pitt and company trying to stave off the annihilation of half the human race in a continent-hopping adventure.

In 1334 B.C.E., a boat carrying Princess Meritaten flees Egypt to escape a deadly plague. She carries a mysterious substance, the Apium of Faras. In 2020, young boys are dying in El Salvador, and scientists are murdered when they try to test the local water. Pitt’s heroics start early when a sabotaged dam bursts and he saves a woman from drowning. As his fans know, Pitt is with NUMA, the National Underwater and Marine Agency. Later, a tanker sinks in the Detroit River, and the president orders NUMA to investigate. A NUMA diver explores the sunken wreck alone (bad idea!) and is murdered. Meanwhile, Evanna McKee, CEO of BioRem Global, is pushing her product, “microorganisms for pollution control.” Readers will quickly suss that she’s up to no good—Pitt realizes the murders must have something to do with the water samples—but the details fill out the story with near-constant action and threats. Children, all boys, are desperately ill in a Mumbai clinic. There are so many crises, Pitt’s children must help: Dirk Junior and his twin sister, Summer, dive into the croc- and criminal-infested Nile for NUMA-supported archaeological research and immediately bump into nefarious activity. Bad guys hunt for them in a burial chamber. The twins carry on the family tradition of bravery and resourcefulness, and Pitt’s wife, Congresswoman Loren Smith-Pitt, plays a smaller but significant role. The investigation leads to Loch Ness and then to a craggy ocean outcropping. “Find Meritaten,” a dying woman pleads to Pitt. “Then save us all.” The settings are colorful, the characters appealing or despicable as needed, and the action is both implausible and fun.

One darned thing after another keeps the Pitts in peril and will keep readers turning the pages.