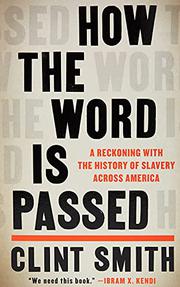 HOW THE WORD IS PASSED

A Reckoning With the History of Slavery Across America

A Black journalist and poet calls for a reconsideration of the way America teaches its history of slavery.

“The story our country tells about the Civil War often flattens some of its otherwise complex realities,” writes New Orleans native Smith, a staff writer for the Atlantic. He notes the U.S. is “at an inflection point, in which there is a willingness to more fully grapple with the legacy of slavery and how it shaped the world we live in today.” However, while “some places have attempted to tell the truth about their proximity to slavery and its aftermath,” others have refused. For this book, the author traveled to nine sites, eight in the U.S. and one in Dakar, Senegal, “to understand how each reckons with its relationship to the history of American slavery.” The result is a devastating portrait with unforgettable details. At the Whitney Plantation in Wallace, Louisiana, historians have labored to help visitors close “the yawning gap on slavery” in their educations—“a hammer attempting to unbend four centuries of crooked nails.” By contrast, the Angola Museum at the Louisiana State Penitentiary has a gift shop with such souvenirs as “a white mug with the silhouette of a guard sitting in a watchtower surrounded by fencing.” When Smith asked his White tour guide to comment on Angola’s role in slavery, the guide replied, “I can’t change that.” At these places and other sites such as Monticello, Galveston Island, and New York City, the author conducted interviews with tour guides, visitors, and others to paint a vivid portrait of the extent to which venues have attempted to redress past wrongs. Smith concludes with a moving epilogue about taking his grandparents to the National Museum of African American History and Culture. The trip elicited painful stories from their childhoods, such as his grandmother recalling walking home from school as White children in buses threw ice cream at her and hurled vicious epithets.

A brilliant, vital work about “a crime that is still unfolding.”