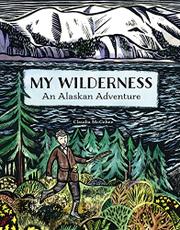 “When I was nine years old, I lived one winter on Fox Island, with my father, an old trapper named Olson, six blue fox, a family of angora goats, and Squirlie. This is what happened.”

So begins an imaginary memoir, based on the records of Rockwell Kent III and his artist father. Artwork reminiscent of Mary Azarian’s graces pages that begin with the son noting that his father wanted to go to Alaska to paint. “We pleaded with Mother until she said yes. Squirlie came too.” In September 1918, father, son and toy squirrel travel by train, steamship and rowboat to get to the remote island, where they renovate an old shed. Now the outdoor adventures begin. Three well-calculated pairs of suspenseful rectos followed by a harmless, concluding page turn keep readers riveted while meting out facts. As the boy heads down a trail, he hears noises that he knows could be a grizzly bear. The page turn reveals a beautiful black-inked portrait of a porcupine. The woodcuts capture the joys of playing in the snow, the warmth of stories by lamplight, occasional loneliness and the hazards of a storm at sea. Readers may be forgiven for thinking that Rocky is a girl before they reach the author’s note, as he looks androgynous in the illustrations.

A taste of wilderness of yore to whet the appetites of future fans of Laura Ingalls Wilder, Louise Erdrich and Kirkpatrick Hill.