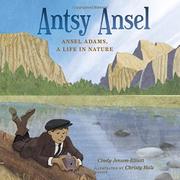 Ansel Adams, a Life in Nature

This distillation of the photographer’s life and achievements focuses on his “antsy” youth and early influences.

A distracted, sickly student, Ansel reveled in nature along the beaches near his San Francisco home. He blossomed after his prescient father withdrew him from formal schooling, enabling home tutoring and such experiences as a season ticket to San Francisco’s 1915 world’s fair. Effectively employing onomatopoeia, Jenson-Elliott reveals 14-year-old Ansel’s pivotal experience at Yosemite. On a family trip, “Ansel got his first glimpse of Yosemite Valley—the ripple-rush-ROAR! of water and light! Light! Light! It was love at first sight.” In Yosemite, his parents gave him his first camera, and “he was off— Run-leap-scramble—SNAP!…Ansel’s photos became a / journal of everything he saw.” The final five double-page spreads compress 60-plus years: photography expeditions in Yosemite, marriage to Virginia Best, Adams’ government-commissioned work documenting the national parks, and the enduring importance of his photographic record of the American wild lands. Hale’s collages blend traditional and digital layering and include cropped photographic images such as Adams’ childhood home and wood-paneled station wagon. Her stylized depiction of Yosemite’s Half Dome and decision to render several iconic photographs as painterly thumbnails display a jarring disregard for Adams’ lifelong absorption with technical and visual precision.

There's a need for a good book for kids about Ansel Adams—and this one misses the mark.