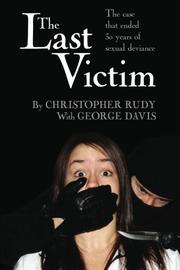 A true-crime account of a forgotten but horrific monster terrorizing the United States, written by one of the police officers responsible for his capture.

William E. Griffith had a troubled childhood and difficult teenage years, growing up to become a moderately successful traveling salesman. His job enabled him to practice his second life as a voyeur and serial rapist—one who remained active for nearly 30 years. Former police officer Rudy and writing partner Davis detail Griffith’s crimes, mistakes, victims and ultimately his capture and incarceration. The authors rely on police reports and personal memory in reconstructing the background, methods, habits and deeds of Griffith, who’s now behind bars. The subject operated by prowling towns in the Midwest for the homes of women, often single mothers, and he’d watch them from a distance while masturbating. His behavior soon escalated, and he became increasingly dangerous: Knife in hand and face covered by a ski mask, he broke into women’s houses and raped them while their children slept. It’s a chilling, disturbing report, but Rudy and Davis don’t linger on the horrific details as some true crime authors do. Equal time is given to Griffith, the police department’s decades-long search and Griffith’s victims. Intimately portraying the victims’ lives discourages readers from becoming inured to the violence and the long-term effects of being attacked. The book, which reads like a long-form journalism, has a purpose: The authors want to ensure that Griffith (who’s incarcerated for at least another seven years) is never released. While not ideal for bedtime reading, it’s a powerful and convincing narrative.