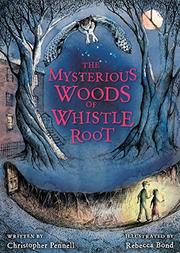 THE MYSTERIOUS WOODS OF WHISTLE ROOT

A strange, whimsical debut that may never quite convince readers why they should care about it.

Carly Bean Bitters is a likable 11-year-old with a strange malady: She is awake at night and sleeps during the day. This allows her to notice a strange phenomenon—a squash that appears on her roof. Carly soon meets Lewis, a musician and a rat, who explains that the squash is a member of his band, taking the place of a rat who has been abducted by owls. When Lewis introduces Carly to the other members of his rat community in the Whistle Root woods, she learns that the owls’ current behavior is abnormal—they used to dance to the rats’ moonlight tunes before they suddenly began snatching them. Thus begins a bizarre journey for Carly, who must discover the reason behind the owls’ sudden change of heart and other strange occurrences in the woods and her town. Though the back story behind the Whistle Root wood and various characters’ behavior is eventually explained, the explanations themselves are often disjointed and don’t quite add up. This feeling of arbitrariness makes it hard for readers to engage with the rats’ plight. While this quiet book achieves a timeless feel—being identifiably set neither in our world nor in another—this cannot atone for a history of the magical woods and creatures that sometimes feels nonsensical. (Fantasy. 8-10)