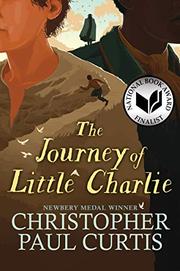 THE JOURNEY OF LITTLE CHARLIE

From the Buxton Chronicles series, volume 3

A white sharecroppers’ son finds himself on a mission to recapture a family that has escaped slavery.

A few weeks after the death of Little Charlie Bobo’s father, Cap’n Buck, the overseer of the plantation on which they farm, tells the 12-year-old and his ma that the elder Charlie Bobo had taken a down payment on a job to recover lost property. In this way, Charlie becomes a partner with a man known for his cruelty on a mission to track enslaved people. When Cap’n Buck finds the family he is looking for, he discovers the son of the family, Sylvanus Demarest, is attending school in Canada, and their mission becomes an international kidnapping. Newbery winner Curtis once again successfully draws on the stories about enslaved people who found freedom in Canada; the pursuit of Sylvanus Demarest is based on an actual incident. By seeing the story through the eyes of a poor white boy and a white overseer, readers confront how so many were connected by slavery. Curtis demonstrates in dramatic fashion how much the formerly enslaved valued their freedom and what they were willing to do to help one of their own remain free. The narrative is briskly paced, and both Little Charlie and Sylvanus are compelling characters. The Southern whites speak in dialect, and they refer to black people with the offensive term “darkie,” both authentic to the 1858 setting.

A characteristically lively and complex addition to the historical fiction of the era from Curtis.