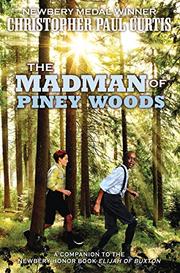 THE MADMAN OF PINEY WOODS

From the Buxton Chronicles series, volume 2

Benji and Red don’t meet for 200 pages, their separate lives in 1901 related in alternating first-person narratives. Benji, an African-Canadian boy in Buxton, and Red, a white boy of Irish descent living in nearby Chatham, have fairly ordinary and free lives. Benji dreams of becoming the best newspaperman in North America; Red mostly wants to survive his crazy Grandmother O’Toole. Echoes of history underlie the tale: Benji lives in a community settled by former slaves; Red is the grandson of a woman haunted by the Irish Potato Famine and the horrors of coffin ships on the St. Lawrence River. Both boys know the legend of a mysterious creature in the woods, called the Madman of Piney Woods by Benji, the South Woods Lion Man by Red. And, indeed, this “madman” and his woods ultimately tie the whole story together in a poignant and life-affirming manner. Humor and tragedy are often intertwined, and readers will find themselves sobbing and chuckling, sometimes in the same scene. Though this story stands alone, it will be even more satisfying for those who have read Elijah of Buxton.

Beautiful storytelling as only Curtis can do it.