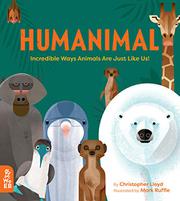 Eye-opening discoveries for readers who think only humans grieve, play, or admire themselves in mirrors.

Claiming the titular word (wrongly) as his own coinage, Lloyd develops the theme that many animals display behavior or characteristics once thought exclusively human, from living in cities (termites) to feeling emotions like love and grief (elephants, bonobos). The author extends commonly seen examples: Yes, as Jane Goodall has proven, chimps do use tools, but so do Australian black kites, which have been seen carrying burning sticks from fires to nearby grasslands to stir up prey. He also points to observations of bees communally deciding on where to establish a new hive; ravens repeatedly rolling down hills for, evidently, fun; and even slime molds showing a knack for constructing networks between food sources that rival for efficiency anything that civil engineers can concoct. In many reports he names animal researchers (though all but two of the 15 in his closing biographical gallery are white and European or American) and describes specific incidents or experiments. Ruffle adds big, boldly hued views of stylized but expressively posed, easily recognizable creatures against monochromatic or simplified natural backgrounds. The rare human figures are nearly all actual portraits.

Convincing evidence that the boundaries between us and them aren’t all that sharp.