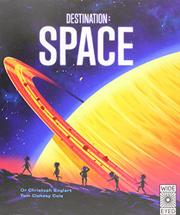 A tour of the universe, from the Big Bang to today’s search for life on other worlds.

Englert leaves the picture incomplete by stopping at the present, but that’s only one problem with this book. His attempts to cram information into the abbreviated, disorganized narrative too often result in either arbitrary leaps (“[Scientists] think dark energy is more like a property of the universe, and that this is the reason why the universe is still EXPANDING today”) or outright misinformation. Examples of the latter include the implication that “thousands” of habitable exoplanets have been discovered (the number is actually around 25, and that’s with a broad definition of “habitable”) and the claim that “Earth’s gravity keeps the Moon from MOVING AROUND EARTH.” The illustrations don’t provide much boost either, as instead of the stunning space photographs or photorealistic images that generally light up this sort of tour, Cole offers mundane painted scenes featuring five young space travelers (all apparently white but one) marveling at garishly colored wonders when they’re not laughing (!) as they and the Earth are “spaghettified” in a black hole. A detachable fold-out poster features a pair of constellation maps on one side without directions for use and an unlabeled view of the Eagle Nebula’s “Pillars of Creation” on the other.

An indigestible jumble likely to be left on the launch pad by many of the available higher-powered surveys.