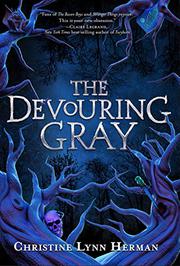 From the Devouring Gray series, volume 1

A parallel-dimension prison for a horrific evil is linked to a small town’s founding families in this riveting debut.

Still grieving her sister’s death, Violet’s life is further uprooted when her mother suddenly moves them back to Four Paths, her hometown. The town goes beyond quirky into odd territory, especially in the way the children of the founders’ families are exalted. Violet learns she’s from one such family, as fellow descendants Justin, Harper, and Justin’s hostile, volatile best friend, Isaac—with lots of bad blood between them—each try to woo her to their side. Justin believes Violet could be key to protecting the town from the Beast imprisoned in the Gray; Harper doesn’t want to see Violet betrayed by Justin like she was. Each of the four families has magical gifts to protect the townspeople from the Beast, now killing at greater frequency. Violet needs to find her family ritual in order to control her disturbing gift and stop the dangerously strange things happening to her; to do so, she must uncover a devastating family history and navigate all the founders’ secrets. The third-person narration hops between characters without a structural pattern, allowing for cinematic cuts between simultaneous action and expertly manipulated reveals. While light on romance, multiple bisexual characters have a variety of storyline outcomes; the primary characters default to white.

Complex characters and creepy concepts will leave readers chomping for the next volume.