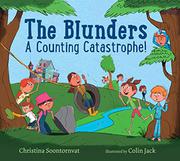 At the end of a day spent outside, 10 siblings each take a turn counting themselves and come up one short.

What will they tell their mother? Readers may think she’ll be relieved, as the kids are outside because she tossed them out after they’d “blundered” too many things in the house. And in Jack’s cartoon illustrations, all views of her save one portray her as either angry or exasperated. After a full afternoon playing by and in the creek (no adult supervision, but it’s only waist-deep), their mom’s words echo: Keep track of each other and be home by sundown. But no matter if they count by ones, twos, or threes, in English or Spanish, every child who attempts the count comes up with only nine kids (readers are in on the joke, as in every illustration the counter is missing a number). Upon returning home, they tell their mother an outlandish story but quickly come clean at the sight of the table set for 10. She finds the missing child, though not the missing pies, which the kids have carefully portioned…twice! Jack’s characters have an array of hair colors and heights, though most tend toward light skin and very thin physiques; one wears glasses. Even though their names are typically associated with gender, the presentation of several kids is ambiguous. Oddly, their noses and ears are distractingly darker than their faces.

This could lead to some storytime or classroom counting fun.