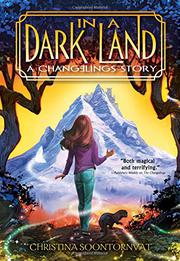 IN A DARK LAND

From the Changelings series, volume 2

Izzy and her friends must once again band together to overcome an evil plan.

Despite the revelation that she is a fairy—a changeling—Izzy decided to return home to her human family at the end of series opener The Changelings (2016). At summer camp with her human, white younger sister, Henrietta, known as Hen, Izzy still misses the magic of the Faerie world and the friends she made there. Summoned to assist in fighting a new danger, Izzy struggles to recapture her magical abilities while fighting familiar feelings of self-doubt. Hen, initially left behind, finds her way to Faerie to help and winds up playing a vital role. Soontornvat’s story unfolds smoothly, but readers unfamiliar with the first volume may struggle somewhat to follow the action. Intriguing new elements—most notably the underwater Fen Whelps who reveal a crucial detail to the two sisters—add interest. As in the first book, it’s an individual who threatens destruction and cooperation that carries the day. A strong connection to nature, the importance of recognizing and using one’s own talents for the greater good, and the importance of family connections, however they are forged, are elements that will enhance the appeal for thoughtful fantasy readers.

A fully imagined world, a wider cast of engaging characters, and a satisfying resolution all help this sequel add up to an enjoyable, if not stand-alone, read.