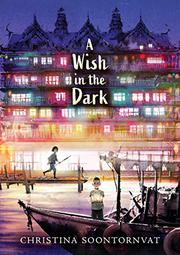 A WISH IN THE DARK

A fugitive from prison must evade his pursuer, the prison warden’s daughter, while potentially joining a revolution.

Pong has lived his whole life in Namwon Prison until a chance escape leaves him free in the city of Chattana. Pong quickly finds that freedom does not come so easily: Since the Great Fire, Chattana is under the strict control of the Governor, who creates the magical lights that run the city and that are the only lights allowed. Marked as a prisoner, Pong has nowhere to turn. Worse, the prison warden’s daughter Nok is on his trail, intent on proving both her worth and that of her family with his capture. Meanwhile, larger forces in Chattana are stirring, as not everyone is happy with the Governor’s rule. Set in a fantasy analogue of Thailand, all characters are presumed Thai, and Thai life and culture permeate the story in everything from the mangoes Pong eats in prison to the monks he meets beyond the prison’s walls. It’s also a retelling of Victor Hugo’s Les Misérables, and Soontornvat has maintained the themes of the original while making the plot and the characters utterly her own. Pong’s and Nok’s narratives are drawn together by common threads of family, loyalty, and a quest to define right and wrong, twining to create a single, satisfying tale.