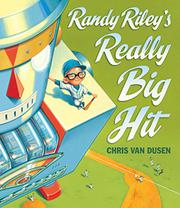 Randy’s first and only home run saves his town from disaster.

Thinking about gravity and probability generally prevents Randy from hitting the ball. He likes baseball, but his real love is science. He researches information about planets, calculates light years, studies the night sky and has a collection of robots. One night he sees the glimmer of a huge fireball headed straight for Earth. He plots its trajectory and realizes that it will hit his own town in 19 days. No one believes his warnings, so he contrives a plan that utilizes all his scientific and mathematical skills. He constructs a giant robot, precisely times the entry of fireball and, whoosh, the robot swings his smokestack bat and hits the fireball back into space. Told briskly in the rhyme scheme and cadence of "Casey at the Bat," Van Dusen’s tale is inventive and humorous. Randy is a lovably nerdy genius who is admired for his brains and is part of a team that doesn’t seem to mind his poor batting average. Gouache paintings use clean crisp lines and sharp, bright colors in a variety of perspectives. Everything from the cars in the driveways to the living-room décor places the events in pre-computer, mid-20th-century America.

A cunning twist on the heroic home run that wins the game.