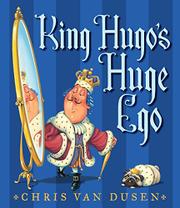 A cautionary tale loses track in this fable of an egomaniacal monarch.

Here’s how this story ends: The king and the sorceress fall in love and live happily ever after. And this is a surprise, because just a few pages earlier, the sorceress had put a curse on the king. His head inflated until it was 10 feet wide, so that he would learn to be less arrogant. Some picture books would conclude the story there, with King Hugo humble and chastened and vowing never again to say things like “Say, who’s the most majestic king?” But a few pages from the end, the sorceress has a realization: “Could it be, deep down inside, / she kind of liked the king?” The author, it seems, is a die-hard romantic. Readers may be less forgiving, not only because the romance comes out of left field, but because the author tries to rhyme “and bent down on his knee” with “then spoke most humbly.” The awkward verses make it difficult to put up with an insufferable main character—and vice versa. The pictures of King Hugo floating through the air, however, are hysterical; readers may wish the book had ended on that punch line. Even in the age of The Stinky Cheese Man, sometimes a tidy moral is best.