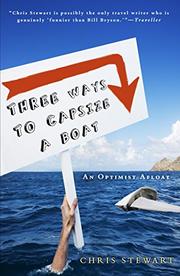 THREE WAYS TO CAPSIZE A BOAT

A modern-day Pollyanna takes to the high seas, cheerfully navigating obstacles on a somewhat random but ultimately moving voyage.

After a “brief brush with fame and fortune” as the original drummer for Genesis, Stewart “plunged into a life of well-deserved obscurity, but…great contentment.” Moving from job to job in London, the author caught a break when a friend’s wealthy relatives hired him to captain a sailboat for them. He accepted immediately, ignoring the pertinent detail that he had never actually sailed before. Clearly hijinks were in order, beginning with his arrival in Greece to find that the boat was being held by a curmudgeonly handyman. A crash course at a London sailing school turned out to be just that—on Stewart’s first journey, he careened into a dock. The author eventually grew accustomed to the nautical life, and the winter after his gig in Greece ended, he took another unexpected opportunity—a longer journey across the Atlantic tracing Leif Eriksson’s route to Newfoundland. The crew was larger on this voyage, allowing Stewart to share the responsibilities, but the challenges of the five-month-long trip were considerable nonetheless. Daily life on the sea was difficult, with temperatures that made it almost impossible to bathe, and endless meals of salted meats. There were moments of profound beauty—starlit skies and a team of new friends that managed, for the most part, to work together in harmony despite trying conditions—but this was hardly a pleasure cruise, with plenty of intense seasickness, hypothermia, life-threatening storms and aching boredom. Meanwhile, a romance back home was proving to be serious, and Stewart had to confront the fact that his years of wanderlust might not be as boundless as he had thought.

Certainly not life-altering, but a pleasant read from an affable, amusing narrator.