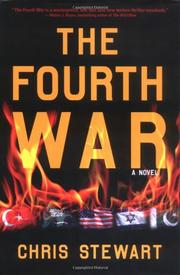 A smash-’em-up, swift-flying Western with a John Wayne–type maverick paramilitary operator on the trail of angry Islamic terrorists in possession of nuclear warheads.

Former USAF pilot Stewart’s fourth thriller (The Third Consequence, 2000, etc.) features sharp, fearless American agent Peter Zembeic, who works for a CIA group known as the Campers and uses his smarts to fight terrorism—certain that he is on the right side. The exiled Taliban have taken refuge in Pakistan to rebuild their forces, and, all at once, a series of calamitous events transpire in and around the country, from the mysterious downing of the Pakistani president’s airplane, to the assassination of Pakistan’s prime minister, to a number of destabilizing explosions in central Islamabad, leaving the country’s 24 nuclear warheads at the mercy of terrorist seizure. Peter and his CIA contact Colonel Shane Bradley (who operates from the Shin Bet Israeli undercover detachment south of Tel Aviv) have decoded a message from their Islamic terrorist spy Donner that “Darkhorse” is coming—a reference to the Apocalypse. Peter, working out of Camp Cowboy, a CIA paramilitary base in northern Afghanistan, is secretly led to the location of the warheads by the Islamic spy Donner, who seems truly motivated by humanitarian means when he explains the ramifications of a nuclear war: “America will be wounded, but we will cease to exist.” Yet the Americans fail to gain the warheads before they fall into the hands of an al-Qaeda terrorist cell led by the Great Leader (who sounds much like bin Laden), along with his dreaded henchman, a torture artist named Angra. Colonel Bradley and his trusty female pilot, Tia, are shot down and roughed up by Angra. Peter comes to the rescue in True Grit fashion, in what proves to be a swaggering, cowboys-and-Indians adventure that occasionally becomes airborne.

Full of military acronyms for the savvy reader.