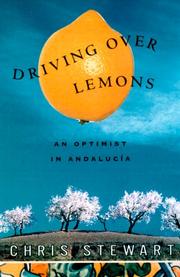 A delightful British bestseller that harnesses the narrative of a cosmopolitan family’s adoption of traditional rural life in a timeless foreign culture to an examination of the greater issues of place, identity, and modernity—all of it told with a wry selfdeprecation in appealing, lushly descriptive prose.

Following stints as a sheep shearer, travel writer, and itinerant farmer, Stewart persuaded his wife Ana to apply these skills (and their savings) toward the acquisition of El Valero, a rambling, decrepit farm with stone buildings and rudimentary access, electricity, and water in the remote Alpujarras region south of Grenada. Stewart’s initial adventures are something of a rural “Rake’s Progress”: he pays a wily landowner £25,000 for the farm, then endures a rambunctious apprenticeship—only to hear the farmer boasting later on about how he fleeced a foreigner. Things improve when the intrepid couple plunge into renovation work at El Valero—securing potable water and rebuilding bridges and stone walls—and then harvest its impressive bounty of olives, lemons, and peppers. Their further adventures include intermittently harrowing excursions into shepherding and sheepdealing, survival of drought and floods, and (eventually) the raising of their daughter Chloë. Throughout, Stewart wisely approaches his subject with a panoramic lens: in crucial ways, his story is primarily concerned with the hardscrabble life and the tenuously maintained traditions of the region’s native residents—who ultimately form mutually beneficial bonds of friendship and support with the newcomers. The work’s address of the subtly developing relationships between the Stewarts and the established community—and its implicit acknowledgment of thorny cultural collision and change—elevates it above the crowded realm of midlifecrisis exotica memoir. If comparisons to Peter Mayle are inevitable, Stewart maintains a warmly populist perspective in describing this more ramshackle, ungentrified terrain.

While genuinely humorous and ultimately light in tone, this vivid, assured debut presents substantial questions about the endurance of rural, agrarian traditions in the face of a supposedly seductive postmodern, wired mass culture.