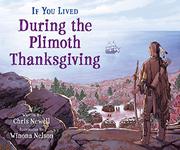 IF YOU LIVED DURING THE PLIMOTH THANKSGIVING

A measured corrective to pervasive myths about what is often referred to as the “first Thanksgiving.”

Contextualizing them within a Native perspective, Newell (Passamaquoddy) touches on the all-too-familiar elements of the U.S. holiday of Thanksgiving and its origins and the history of English colonization in the territory now known as New England. In addition to the voyage and landfall of the Mayflower, readers learn about the Doctrine of Discovery that arrogated the lands of non-Christian peoples to European settlers; earlier encounters between the Indigenous peoples of the region and Europeans; and the Great Dying of 1616-1619, which emptied the village of Patuxet by 1620. Short, two- to six-page chapters alternate between the story of the English settlers and exploring the complex political makeup of the region and the culture, agriculture, and technology of the Wampanoag—all before covering the evolution of the holiday. Refreshingly, the lens Newell offers is a Native one, describing how the Wampanoag and other Native peoples received the English rather than the other way around. Key words ranging from estuary to discover are printed in boldface in the narrative and defined in a closing glossary. Nelson (a member of the Leech Lake Band of Minnesota Chippewa) contributes soft line-and-color illustrations of the proceedings. (This book was reviewed digitally.)