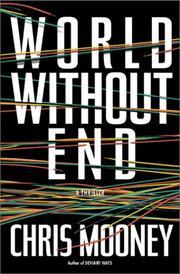 An egregiously implausible technothriller that manages to combine a great deal of violence and action without providing either tension or suspense, an unlikely accomplishment.

CIA operative Stephen Conway is a black belt in martial arts but seems to spend much of his time being attacked and left for dead by one predator or another. The story turns on the attempts by Stephen and his cohorts to protect a new cloaking device that would enable operatives to move unseen into various venues while members of the Russian mafia, no less diligent, try to steal the cloaking suit. Along the way, the action moves between Boston and Austin with all the requisite luxury vehicles, violence, and kinky sex. Innocent people are killed, double agents abound, and Stephen never seems exactly sure what the point of this whole exercise might be. Meantime, Mooney (Deviant Ways, 2000) throws in literary references ranging from Tom Clancy and Stephen King to John Irving and William Styron—and, mixing genres, even indulges in an archvillain named Faust who's fond of quoting from the Greek myth of Daedalus and Icarus, as well as Yeats’s poem “The Second Coming,” presumably to indicate that the Apocalypse is upon us. Along with the creaking infrastructure and clichéd plot turns, however, there are also occasional naturalistic sections dealing with Stephen’s difficult childhood and the loyal friends who shared it with him, as well as some nice descriptions of Austin and Beacon Hill.

Still, there is little to recommend here, even to hardcore fans of this particular subgenre, and Stephen’s weary disillusionment at the close, while predictable, is neither persuasive nor affecting.