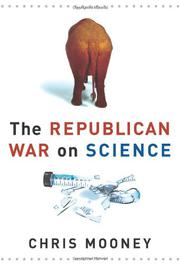 THE REPUBLICAN WAR ON SCIENCE

A litany of indictments of misuse and abuse by the current administration, painstakingly documented by a journalist who has made science and politics his beat.

Mooney (a writer for Mother Jones, Slate, the Boston Globe) traces the “war on science” back to the Reagan days (remember Star Wars? acid rain? the ban on fetal tissue research?). He goes on to chronicle the anti-science movement that gained momentum in the Gingrich-led Congress of the ’90s, which dismantled the Office of Technology Assessment and stacked hearings with fringe scientists ready to deny the ozone hole, global warming and dioxin risks. Mooney catalogues the players, the right-wing think tanks and the administration spokespeople who continue to deny a human role in global warming or species destruction, who argue that condoms are unsafe, that abortion is linked to breast cancer and that “Plan B” will encourage teen sex. Add to these abuses the litmus tests for candidates for government science advisory councils and political censoring of what gets posted as health information on the Web. Perhaps the most chilling quote is from a Ron Suskind interview with a “senior advisor,” who defined Suskind and others as people who “believe that solutions emerge from your judicious study of discernible reality,” adding, “That’s not the way the world really works anyone. We’re an empire now, and when we act, we create our own reality.” One can fault Mooney for damning all Republicans in the title—he admits there are the John McCains, for example, as well as problematic Democrats. Sharper editing to eliminate some repetitiveness would also help.

Mooney has put the right-wing handwriting on the wall, and the prospect is scary.