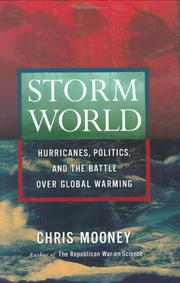 Hurricanes, Politics, and the Battle Over Global Warming

Absorbing, informed account of the politics behind a pressing contemporary controversy: Does global warming intensify hurricanes?

In his preface, Mooney (The Republican War on Science, 2005, etc.) states that global warming did not directly cause Katrina, or any other hurricane. He devotes the rest of the book to explaining why and how climate change intensifies and increases storms. No fan of the Bush Administration, the author also reveals the ways in which political interests keep crucial data from reaching public attention or, failing that, work to make sure it is skewed and/or misconstrued. He humanizes scientific disputes, and he takes care to draw vivid portraits of the scientists spearheading debate. One camp, “the empiricists,” led by famed hurricane forecaster William Gray, denies that hurricane fluctuations are anything but natural and periodic. The second group, which Mooney dubs “the modelers,” uses computer forecasting techniques to show that as the earth’s temperature increases, so does storm frequency and intensity. Into nitty-gritty details of the science behind these arguments, the author weaves tales of political intrigue and media hype. For example, although the climatologists portrayed in the book disagree primarily about global warming’s effects on hurricanes, the media twists their disputes into clashes over whether global warming exists at all, or is human-influenced. Unsurprisingly, hurricane wars have recently become highly politicized. Aside from reiterating the importance of de-linking politics from environmental science, Mooney closes with several useful recommendations. The most pressing of these is the need to consider escalating storm violence when planning the redevelopment of New Orleans—or any near-coastal city for that matter.

“We can’t give an exact answer about how global warning will modify hurricanes,” concludes the author. “Yet [that] doesn’t mean we have no right to feel concerned.”