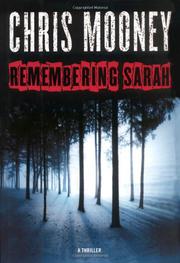 A young girl is stolen in a near-miss psychological thriller, Mooney’s third, triggering guilt, blame, and violence as bitter by-products.

At five, Sarah is as headstrong as she is charming. She is also the battlefield for her parents’ war of attrition, combat that is ongoing, painful, and not really about Sarah despite the pretense. What’s really happening between Mike Sullivan and his wife Jess is a deteriorating marriage. Once, the relationship was uncomplicated and loving; now it’s a prison each wants to escape. Admitting this, however, comes hard, and so the two argue instead—conveniently about the proper way to bring up Sarah. Cautiously, says Jess. Loosen the reins, insists Mike; black-and-blues are lessons that can help prepare a child for a bruising world. On a snowy day in small-town Belham, just outside of Boston, Mike takes Sarah sledding—against Jess’s specific prohibition. Actually, behind her back. In Roby Park, the hill is dramatically steep. Predictably, Sarah wants to navigate it by herself. Even Mike views the idea with alarm, but willful Sarah has her way. She proceeds to the top and in a matter of seconds goes missing. There are lots of potential witnesses, but none prepared to be definitive. Sarah has simply vanished, without explanation. Mike is stricken, Jess enraged. Fast-forward five years, five desolate years, when a suspect has emerged, a disgraced Catholic priest named Francis Jonah, who’s been implicated in the disappearance of two other little girls. While the evidence against him is substantial, it’s not quite courtroom-worthy. Doggedly, the police set about shoring up their case. Devastated by loss, consumed by hate, will Mike be able to wait?

Mooney (World Without End, 2001, etc.) offers a sympathetic protagonist in a compelling situation, and for some that will be enough to get them through the storm of wildly implausible plotting that blows up toward the end.