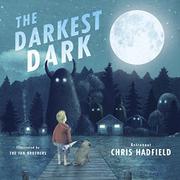 Young Chris is afraid of the dark until he sees the Eagle land on the moon and is moved by the beauty of space.

By day, little Chris flies his cardboard rocket on important missions, fighting imaginary ETs and heading to Mars. But by night, the blond, white boy is struggling to sleep on his own, repeatedly waking his parents. Then on July 20, 1969, he witnesses Neil Armstrong’s historic moon walk and realizes that while nothing in his dark room has changed, he has changed. Chris now wants “to explore every corner of the night sky.” Text and illustrations crescendo as the boy—whose bed is floating among fantastical imaginings in space—realizes that in the dark he is never alone, because he has dreams of possibility. The graphite illustrations, digitally colored in a cool palette, glow with a soft, luxurious sense of light. Full of rich texture and value, with captivating compositions and hidden hints, the artwork is stunning; however, the generic stylization of the main character’s face is disappointing given the amount of photographic referencing and meticulous detailing surrounding it. The book includes moving backmatter on astronaut and co-author Hadfield’s life, including photographs and illustrated mementos, and an inspiring message from Hadfield about the wonders of the night sky.

An uplifting, valuable addition to the “scared of the dark” bookshelf and a must for the budding space explorer (or really, any dreamer).