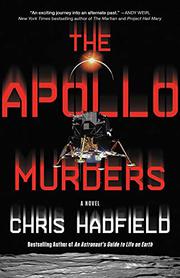 Incorporating real-life characters and events, spanning decades and distances both terrestrial and translunar, this NASA-heavy thriller has everything, including perhaps a bit too many meticulously reported technical procedures. The story opens with not one but two aircraft episodes—a bird strike wrecks an F-4 Phantom and a Cessna 170B is taken out for a rhapsodic spin—then follows the developing career of Kaz Zemeckis, who, until the bird strike cost him an eye, had been a military astronaut with good prospects of going to the moon. Repurposed as a crew liaison for NASA, Zemeckis is involved in both the training for and the mission of Apollo 18. Hadfield's use of real people brings historical authenticity to the novel, and there are many tidbits of NASA lore that only an insider could provide, but the devotion to technical facts has some drawbacks. There are more moving parts to this novel than there are in a Saturn V, and Hadfield is careful to give each part a complete description: provenance, purpose, design, and in-use characteristics are all faithfully recorded. This makes the first part of the novel so technically focused that it seems the action will never get off the launchpad, though doubtless there are readers who will revel in these details. In the event, Apollo 18 is a complex mission. Initially charged with collecting geological samples and sabotaging the new Russian moon rover, the three astronauts are then told to sabotage the Russians' new spy satellite, which is thought to be unmanned but is not. The crisis created by this bungled attempt at space vandalism establishes the main narrative thread, with Zemeckis back at Mission Control in Houston struggling to keep the mission going. There is a murder and other deaths as well as injuries, vomiting, and space brawls, all reported in close detail. Though the climax is somewhat over-the-top, the basic bones of a good thriller are here even if the beginning is a slow burn.

Space nerds will geek out, and everyone else eventually gets a pretty good ride.