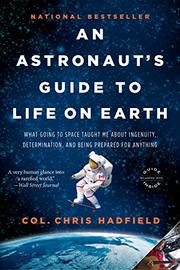 AN ASTRONAUT'S GUIDE TO LIFE ON EARTH

What Going to Space Taught Me About Ingenuity, Determination, and Being Prepared for Anything

Hadfield chronicles what it took to achieve his dream of becoming an astronaut.

The author explains how the excitement of watching Neil Armstrong's televised moon landing changed his life. At age 9, he “knew, with absolute clarity that I wanted to be an astronaut.” Though the odds were particularly slim due to the fact that he was (and remains) a Canadian, he succeeded in becoming a top NASA astronaut. The author explains how he charted his career with fierce determination. He joined the Canadian air force, studied engineering with a military scholarship and then volunteered to be a test pilot. He was then chosen to be one of a few fortunate Canadian airmen tracked into NASA. By the time of his retirement in 2012, he had served as director of NASA operations in Russia and chief of International Space Station Operations. On his last space mission, Hadfield served as commander of the International Space Station, where he spent 146 days in space while making 2,336 orbits around the Earth. The author provides a satisfying behind-the-scenes look at the life of an astronaut, which is a useful corrective to the popular celebrity image. He explains that being in space helped him to keep his perspective even while enjoying the excitement of his job—“most people, including me, tend to applaud the wrong things: the showy, dramatic record-setting sprint rather than the years of dogged preparation or the unwavering grace displayed during a string of losses.” The author emphasizes that becoming an astronaut involved developing physical capabilities and technical skills through tireless practice and a fanatic attention to detail. However, he also delivers a lively account of his experiences with the joys of weightlessness as well as the discomfort of leaving the ship for a space walk.

A page-turning memoir of life as a decorated astronaut.