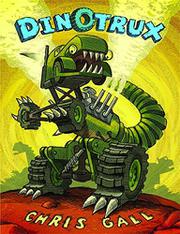 From the Dinotrux series

The tough working trucks in Kate and Jim McMullan’s I Stink! (2002) and sequels look like lightweights next to their brawny prehistoric antecedents in Gall’s rousing, grimy full-bleed spreads. Crushing rocks and trees, flattening smaller creatures and sending diminutive cave people fleeing in pop-eyed panic, a round dozen metal behemoths roll by, from towering Craneosaurus—“CRACK, MUNCH. / Look out birds, it’s time for lunch!”—and the grossly incontinent Blacktopodon to a stampede of heavily armored Semisaurs and the “bully of the jungle,” toothy Tyrannosaurus Trux. Why aren’t these motorized monsters with us today? They are, though in the wake of a mighty storm that left most mired in the mud to rust, the survivors went South and, as a climactic foldout reveals, evolved into the more beneficent vehicles we know and love. Dinotrux ruled their world, and now they’re likely to rule this one too. Bellow on! (Picture book. 5-9)