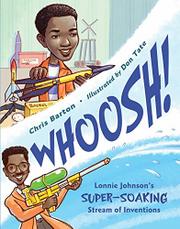 A tinkering African-American boy grows up to become the inventor of a very popular toy.

Lonnie Johnson always tinkered with something. As a kid, he built rockets and launched them in the park amid a crowd of friends. (He even made the rocket’s fuel, which once caught fire in the kitchen. Oops.) As an adult he worked for NASA and helped to power the spacecraft Galileo as it explored Jupiter. But nothing is as memorable in the minds of kids as his most famous invention (to date): the Super-Soaker. While testing out a new cooling method for refrigerators, Johnson accidentally sprayed his entire bathroom, and the idea was born. However, the high-powered water gun was not an instant success. Barton shows the tenacity and dedication (and, sometimes, plain good timing) needed to prove ideas. From the initial blast of water that splashes the word “WHOOSH” across the page (and many pages after) to the gatefold that transforms into the Larami toy executives’ (tellingly, mostly white) reactions—“WOW!”—Tate plays up the pressurized-water imagery to the hilt. In a thoughtful author’s note, Barton explains how Johnson challenges the stereotypical white, Einstein-like vision of a scientist.

A delightfully child-friendly and painfully necessary diversification of the science field.