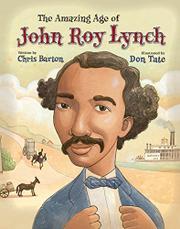 An honestly told biography of an important politician whose name every American should know.

Published while the United States has its first African-American president, this story of John Roy Lynch, the first African-American speaker of the Mississippi House of Representatives, lays bare the long and arduous path black Americans have walked to obtain equality. The title’s first three words—“The Amazing Age”—emphasize how many more freedoms African-Americans had during Reconstruction than for decades afterward. Barton and Tate do not shy away from honest depictions of slavery, floggings, the Ku Klux Klan, Jim Crow laws, or the various means of intimidation that whites employed to prevent blacks from voting and living lives equal to those of whites. Like President Barack Obama, Lynch was of biracial descent; born to an enslaved mother and an Irish father, he did not know hard labor until his slave mistress asked him a question that he answered honestly. Freed by the Emancipation Proclamation, Lynch had a long and varied career that points to his resilience and perseverance. Tate’s bright watercolor illustrations often belie the harshness of what takes place within them; though this sometimes creates a visual conflict, it may also make the book more palatable for young readers unaware of the violence African-Americans have suffered than fully graphic images would. A historical note, timeline, author’s and illustrator’s notes, bibliography and map are appended.

A picture book worth reading about a historical figure worth remembering.