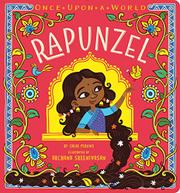 From the Once Upon a World series

A retelling of the classic fairy tale with India as its setting.

This latest addition to the Once Upon A World series tells the well-known story of the maiden with beautiful long tresses locked away in a tower by an evil witch and the prince who falls in love with her. As with Perkins’ Cinderella (illustrated by Sandra Equihua, 2016) and Snow White (illustrated by Misa Saburi, 2016), the text has been simplified for a younger audience, and the distinguishing twist here is its setting in India. The mixed-media illustrations of plants, animals, village life, and, of course, Rapunzel, the witch, and the prince come alive in warm, saturated colors. Other than the visuals, there is little to differentiate the story from traditional tellings. As always, it is still the prince who will eventually lead Rapunzel to her salvation by taking her to his kingdom far away from the witch, but that is the nature of fairy tales. The only quibble with this book and indeed with this series is the board-book format. Given the fact that the audience most likely to enjoy it is beyond the board-book age, a full-size book would have done more justice to the vibrant artwork.

Adults wishing to expand the worldviews of their young charges beyond Eurocentric interpretations will find plenty of visual delights in this one, though they’ll wish it were bigger.