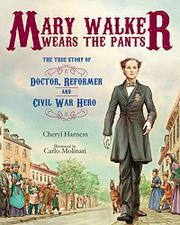 Pants: Women were not supposed to wear them.

Mary Walker not only got her medical degree in 1855, but found it much easier to do her work dressed smartly in men’s trousers and tailored jacket. She was not accepted in the Union Army at first, but as an unpaid hospital volunteer, she tended the Civil War sick and wounded in Washington, D.C., and field hospitals. She was finally commissioned in late 1863, then captured and imprisoned by the Confederates. She was exchanged for a Confederate officer, and in 1866, she was given the Medal of Honor, the first and only woman to receive it. Harness tries valiantly to work this complicated story into one comprehensible for the early grades, but it makes for some difficult phrasing. Calling her, as some did, a “pesky camp follower” has very negative implications that adults, at least, will get. “Many Americans, especially in the South, firmly believed that enslaving people from Africa was a normal thing to do,” is an awkward encapsulation of the reason for the Civil War. Molinari’s images are richly colored and drawn in an old-fashioned but very compatible style and do a lot toward fleshing out the text.

Despite awkwardness, this is a welcome window into an important American life