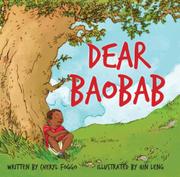 Maiko experiences an orphan’s loneliness and an immigrant’s unease but eventually finds comfort in his new home.

The titular baobab is an ancient tree in Maiko’s East African village, the site of his fondest memories of playing with friends who didn’t say “that his ears struck straight out from his head.” After his parents die (no cause is mentioned), he goes to North America to live with his aunt and uncle. His only friend is a small spruce tree, 7 years old like Maiko, growing too close to his suburban house’s foundation. His spiritual communion with this tree is so strong that he tries to save it when his aunt and uncle want to cut it down. Watercolors with pleasantly loose ink lines show generic scenes in Africa and multicultural North America. Maiko makes friends with Li, but Leonard, another classmate, continually makes fun of his ears (which do not appear unusual in the illustrations). Maiko has experienced his first Halloween and Christmas when, without explanation, Leonard stops making fun of him. Readers might wonder, too, whether Maiko’s ability to hear the spruce’s "song" is too sweetly poetic. On his 8th birthday in spring, in a neat resolution, the family finds a perfect home for the spruce.