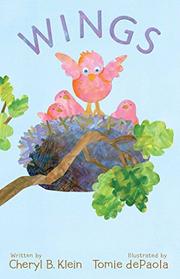 by Cheryl B. Klein ; illustrated by Tomie dePaola

In a narrative told with just 12 rhyming words and dePaola’s bright collages, a fledgling takes its first flight.

“Wings!” the text proclaims as the chubby pink bird stretches its pinions. But: “Clings,” it continues as the little bird looks down, claws gripping the nest. The bird “flings” itself out, then tumbles and falls into a puddle (“stings”), “wrings” itself dry, inspects its bruises (or “dings”), gazes at some “things” (a snail and some worms), one of which it resolves to “bring” back to the nest. It “springs” back into the air, “sings” in triumph, flies in “rings” through the air, and “zings” with its nest mates up to two parent birds. While it’s a complete arc, the book feels more like a stunt than a story. Limiting the text to one-syllable “ing” words results in the not-really-apropos “stings” when the bird crash-lands, the at-first-inscrutable “dings” (children and adults alike will wonder where the dinging sound is coming from before the adult readers recall its alternate meaning), and the flabby “things.” DePaola’s illustrations too often fail to pick up the slack: The bird shakes the water off rather than “wring[ing]” itself dry; depicting the singular conjugation “sings” are the three nest mates with beaks open and the protagonist, its beak clamped shut on a worm—just who is singing?

An artful curiosity and perhaps a challenge for writing units, but not a great picture book.