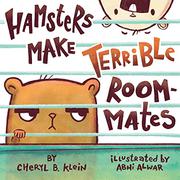 by Cheryl B. Klein ; illustrated by Abhi Alwar

The trials and tribulations of hamster cohabitation.

Henry and Marvin have been roommates for 205 days. Marvin is a cheerful, chatty, cream-colored hamster who enthuses nonstop about sunflower seeds, chatters away on the wheel, and incessantly interrupts Henry’s peaceful tube-crawling, reading, and resting time. Henry, the beleaguered brown hamster narrator, tells his tale of woe in a melodramatic soliloquy, complete with film-noir spotlights, tally marks on the wall, and many a heavy-eyebrowed look to readers. “On Day Two Hundred and Six, though…” Henry finally snaps, giving chipper Marvin a thorough dressing-down. Finally left in peace, Henry enjoys a day of silence until some clear communication from Marvin sets the story straight. Henry reflects ruefully, “I like the quiet. / But he didn’t know that. / He wanted me to talk. / But I didn’t see that.” The story ends on a sweet note, with Henry apologizing and both sides establishing new ground rules that meet both of their needs. Klein’s pithy storytelling both thoughtfully conveys the introvert-extrovert divide and gently teaches the art of apology. Alwar’s watercolor-textured digital illustrations are funny, expressive, and emotive, with a combination of spot and spread illustrations moving the story along. Charming endpapers show Marvin and Henry—before, and after.

Whether for hamsters or humans, a lighthearted how-to guide to being a good roommate.