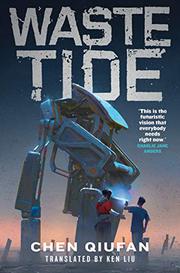 Cutting-edge, near-future science fiction from China: With a setting based on a real-world Chinese town that recycled electronic waste from all over the world, Chen's (aka Stanley Chan) first and so far only novel, originally published in 2013, comes to vibrant life in Liu's deft and informative translation.

To Silicon Isle, a vast waste dump where electronic devices and components are manually recycled, desperate workers flood in from all over China despite the extreme toxic hazards and attacks by fanatical environmentalists. Ruthless local clans enforce long hours and wretched wages. Luo Jincheng, head of the most powerful clan, despises the migrant workers and treats them with particular brutality and contempt. He refuses to do business with Scott Brandle, a mysterious American nominally representing TerraGreen Recycling, a global corporation hoping to reap vast profits from automating the processing. Brandle's interpreter, Chen Kaizong, a young Chinese-American who speaks the local dialects, hopes to find his roots; instead, he finds Mimi, a waste girl viciously abused by Luo's thugs, who dreams of earning enough money to buy her family out of poverty. Her one friend, or perhaps exploiter, is Brother Wen, an electronics genius building devices and weapons out of junk and secretly assembling an army of the downtrodden. What nobody anticipates are the active remnants of biological warfare experiments discarded in the trash, with horrifying and tragic consequences. The author patiently engineers these ingredients and personalities into a nightmarish conflict while showing a particular talent for writing viscerally gripping action. The moral dilemmas he presents are all too familiar, with seemingly little to differentiate villains, victims, and victors. China itself, of course, takes center stage, as the past—with its rich cultural backdrop, paramount loyalty to family and clan, and reverence for tradition—confronts social upheaval and the accelerating importance of artificial intelligence and virtual reality.

Chinese science fiction, once an unknown quantity in the U.S., is making its way to the forefront through sheer excellence.